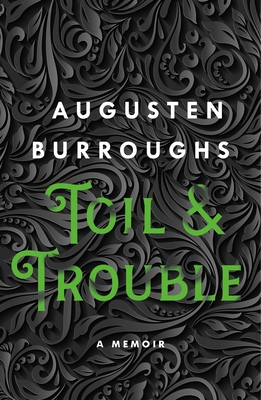 By Augusten Burroughs
$17.99
Have a question? Please let us know and we will reply as soon as we can. Thanks!

“Augusten Burroughs never ceases to amaze his readers with his honest stories, and Toil & Trouble won’t disappoint his fans! A gift shared with his mother, witchcraft has been passed down his family tree and has guided his life. Moving from the city life to the wilds of Connecticut, Burroughs’ gift guides him and husband Christopher to the right place at the right time—and saves them with a little premonition! You are invited (perhaps welcomed?) to be skeptical, but once you finish the book you might just wonder why you ever were.”
— Jennifer Kandarian, Books on the Square, Providence, RI

“You don’t have to be a believer to love this memoir from Augusten Burroughs. The story of how he and his husband decide to move from Manhattan to Connecticut, with all of its real estate woes, renovation horrors, and natural disasters, is hilarious on its own. The supernatural underpinnings cast an eerie shadow over the whole thing. I might not believe in witchcraft, but Augusten Burroughs is definitely a witch!”
— Susan Taylor, Book House of Stuyvesant Plaza, Albany, NY

From the number one New York Times bestselling author comes another stunning memoir that is tender, touching...and just a little spooky.

"Here’s a partial list of things I don’t believe in: God. The Devil. Heaven. Hell. Bigfoot. Ancient Aliens. Past lives. Life after death. Vampires. Zombies. Reiki. Homeopathy. Rolfing. Reflexology. Note that 'witches' and 'witchcraft' are absent from this list. The thing is, I wouldn’t believe in them, and I would privately ridicule any idiot who did, except for one thing: I am a witch."

For as long as Augusten Burroughs could remember, he knew things he shouldn't have known. He manifested things that shouldn't have come to pass. And he told exactly no one about this, save one person: his mother. His mother reassured him that it was all perfectly normal, that he was descended from a long line of witches, going back to the days of the early American colonies. And that this family tree was filled with witches. It was a bond that he and his mother shared--until the day she left him in the care of her psychiatrist to be raised in his family (but that's a whole other story). After that, Augusten was on his own. On his own to navigate the world of this tricky power; on his own to either use or misuse this gift.

From the hilarious to the terrifying, Toil & Trouble is a chronicle of one man's journey to understand himself, to reconcile the powers he can wield with things with which he is helpless. There are very few things that are coincidences, as you will learn in Toil & Trouble. Ghosts are real, trees can want to kill you, beavers are the spawn of Satan, houses are alive, and in the end, love is the most powerful magic of all.

Augusten Burroughs is the author of Running with Scissors, Dry, Magical Thinking: True Stories, Possible Side Effects, A Wolf at the Table and You Better Not Cry. He is also the author of the novel Sellevision, which has been optioned for film. The film version of Running with Scissors, directed by Ryan Murphy and produced by Brad Pitt, was released in October 2006 and starred Joseph Cross, Brian Cox, Annette Bening (nominated for a Golden Globe for her role), Alec Baldwin and Evan Rachel Wood. Augusten's writing has appeared in numerous magazines and newspapers around the world including The New York Times and New York Magazine. In 2005 Entertainment Weekly named him one of "The 25 Funniest People in America." He resides in New York City and Western Massachusetts.

"Burroughs’ unique ability to translate his fears, anxieties, and dreams into something universal that feels a little like, well, magic...This hilarious and spellbinding memoir will generate a whirl of requests." —Booklist, starred review

"A satisfying success story from a reliably outspoken raconteur." —Kirkus on Lust & Wonder

“All of the wisdom he dispenses in his new book-delivered with the dark, acidic humor we've come to expect is certainly well-earned.” —The Boston Globe on This is How

“Dry is more than a heartbreaking tale; it's a heroic one. As with its predecessor, we finish the book amazed not only that Burroughs can write so brilliantly, but that he's even alive.” —People on Dry

“It makes a good run at blowing every other [memoir] out of the water.” —The Washington Post on Running with Scissors

“Funny and rich with child's eye details of adults who have gone off the rails.” —The New York Times Book Review on Running with Scissors