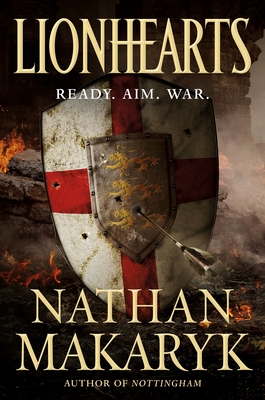 This is book number 2 in the Nottingham series.

History and myth collide in Nathan Makaryk's Lionhearts, a riveting story of vengeance, redemption and war, perfect for fans of Game of Thrones

To raise the money for his ransom, every lord in England is raising taxes, the French are eyeing the empty throne, and the man they called, “Robin Hood,” the man the Sherriff claims is dead, is everywhere and nowhere at once.

He’s with a band of outlaws in Sherwood Forest, raiding guard outposts. He’s with Nottingham’s largest gang, committing crimes to protest the taxes. He’s in the lowest slums of the city, conducting a reign of terror against the city's most vulnerable. A hero to some, a monster to others, and an idea that can't simply be killed.

But who's really under the hood?

Nathan Makaryk is the author of Nottingham, and a theater owner, playwright, director and actor, living in southern California. None of these pay very well, so he also has a real job teaching audio systems networking software to people who have no idea he's also a novelist and theater guy. He likes dogs and scotch because of course he does.

“Nathan Markaryk's bold reimagining of the Robin Hood legend is the most pleasurable reading experience I've had since first discovering George R.R. Martin's A Song of Ice and Fire. Nottingham is an expansive, thoroughly engrossing epic with vividly drawn characters and rich historical detail. I can't wait to read the next installment.” —Bryan Cogman, Co-Executive Producer/Writer, Game of Thrones

“This Robin Hood is so much more realistic about the politics of the time that it was like a new story greatly expanding a fragment of a myth. If you like Historical Fiction then Nottingham may be your big summer read.” —Larry Yoder, The Bookies, Denver, Colorado

“A remarkable and comprehensive story ... this is unique fiction that compels revision of the Robin Hood story and its place in history.” —The Historical Novel Society