The Other Bennet Sister: A Novel (Hardcover) 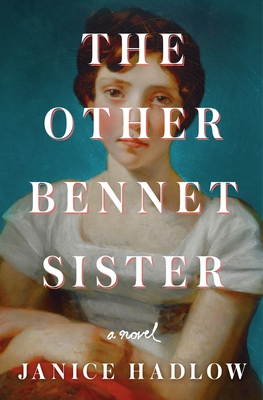 By Janice Hadlow
$28.99
Have a question? Please let us know and we will reply as soon as we can. Thanks!

A NPR CONCIERGE BEST BOOK OF THE YEAR

Mary, the bookish ugly duckling of Pride and Prejudice’s five Bennet sisters, emerges from the shadows and transforms into a desired woman with choices of her own.

What if Mary Bennet’s life took a different path from that laid out for her in Pride and Prejudice? What if the frustrated intellectual of the Bennet family, the marginalized middle daughter, the plain girl who takes refuge in her books, eventually found the fulfillment enjoyed by her prettier, more confident sisters? This is the plot of Janice Hadlow's The Other Bennet Sister, a debut novel with exactly the affection and authority to satisfy Jane Austen fans.

Ultimately, Mary’s journey is like that taken by every Austen heroine. She learns that she can only expect joy when she has accepted who she really is. She must throw off the false expectations and wrong ideas that have combined to obscure her true nature and prevented her from what makes her happy. Only when she undergoes this evolution does she have a chance at finding fulfillment; only then does she have the clarity to recognize her partner when he presents himself—and only at that moment is she genuinely worthy of love.

Mary’s destiny diverges from that of her sisters. It does not involve broad acres or landed gentry. But it does include a man; and, as in all Austen novels, Mary must decide whether he is the truly the one for her. In The Other Bennet Sister, Mary is a fully rounded character—complex, conflicted, and often uncertain; but also vulnerable, supremely sympathetic, and ultimately the protagonist of an uncommonly satisfying debut novel.

Janice Hadlow worked at the BBC for more than two decades, and for ten of those years she ran BBC Two and BBC Four, two of the broadcaster’s major television channels. She was educated at Swanley School in Kent and graduated with a first class degree in history from King’s college, London. She is the author of A Royal Experiment, a biography of Great Britain's King George III. She currently lives in Edinburgh. The Other Bennet Sister is her first novel.

NAMED A BEST BOOK OF 2020 BY LIBRARY JOURNAL, NPR, AND CHRISTIAN SCIENCE MONITOR

“An immersive and engaging new version of a familiar world . . . at once true to the source material and to life . . . Hadlow’s great achievement is to shift our sympathies so completely that . . . it’s difficult not to race through those final pages, desperate to know if [Mary] will, after all, be allowed—will allow herself—a happy ending.”
—Jo Baker, The Guardian

“If you thought Mary, the nerdy, plain sibling in Pride & Prejudice, was too dull to warrant her own novel, think again: In Hadlow’s imaginative retelling, the sister with no prospects finally gets some respect—and perhaps even a guy.”
–O, The Oprah Magazine

“The Other Bennet Sister goes beyond Pride and Prejudice to imagine how the Marys of the world might find happiness . . . A captivating and heartening story.”
—Literary Hub

“Spirited [and] sure to please . . . Hadlow proves adept at delivering plot twists and social commentary deserving of her mentor.”
—The Star Tribune

"Debut novelist Hadlow manages it with aplomb.... [writing] with sensitivity, emotional clarity, and a quiet edge of social criticism Austen would have relished. Entertaining and thoroughly engrossing."
—Kirkus (starred review)

“Absolutely magical. . . . It is a marvel that The Other Bennet Sister is [Hadlow’s] first novel. Her writing is elegant and wry, the story wise and engrossing. . . . [You'll] be surprised that you aren't actually reading Jane Austen.”
—BookPage (starred review)

"[A] spectacular debut. . . . Writing in prose with the crisp liveliness of Austen's own, Hadlow remains true to the characterizations in Pride and Prejudice without letting them limit her. . . . This will delight Janeites as well as lovers of nuanced female coming-of-age tales."
—Publishers Weekly (starred review)

"Delightful. . . . This is a charming and enchanting story . . . [that readers of Pride and Prejudice] will love, as will historical fiction readers looking for intelligent heroines with agency and heart."
—Library Journal (starred review)

“Satisfyingly evocative of [Pride and Prejudice] and yet strikingly contemporary. . . . Hadlow grafts a contemporary coming-of-age story onto a literary masterpiece . . . building upon what Austen had achieved—writing boldly and honestly about women’s lives.”
—The Christian Science Monitor

"A touching redemption of one of the least-liked characters in Jane Austen's novels. . . . [Perfect for] any fan of the original."
—Portland Review of Books

"Gorgeous. . . . [The Other Bennet Sister] is a wonderfully, warm, comforting read—perfect on a winter’s night."
—The Sun (UK)

"Impeccably researched, this lifts Mary from obscurity, as she breaks out of her mother's world and follows her own path."
—Daily Mail

“Heartfelt. . . . A triumphant novel that is determined, romantic, and hopeful.”
—Medium

"A heroine that even Ms. Austen would approve of. A treat for—and for anyone else who likes their fiction to have sense and sensibility."
—Daisy Goodwin, New York Times bestselling author of The American Heiress and Victoria