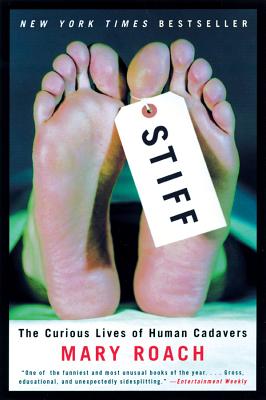 "One of the funniest and most unusual books of the year....Gross, educational, and unexpectedly sidesplitting."—Entertainment Weekly

Stiff is an oddly compelling, often hilarious exploration of the strange lives of our bodies postmortem. For two thousand years, cadavers—some willingly, some unwittingly—have been involved in science's boldest strides and weirdest undertakings. They've tested France's first guillotines, ridden the NASA Space Shuttle, been crucified in a Parisian laboratory to test the authenticity of the Shroud of Turin, and helped solve the mystery of TWA Flight 800. For every new surgical procedure, from heart transplants to gender reassignment surgery, cadavers have been there alongside surgeons, making history in their quiet way.

In this fascinating, ennobling account, Mary Roach visits the good deeds of cadavers over the centuries—from the anatomy labs and human-sourced pharmacies of medieval and nineteenth-century Europe to a human decay research facility in Tennessee, to a plastic surgery practice lab, to a Scandinavian funeral directors' conference on human composting. In her droll, inimitable voice, Roach tells the engrossing story of our bodies when we are no longer with them.

Mary Roach is the author of five best-selling works of nonfiction, including Grunt, Stiff, and, most recently, Fuzz. Her writing has appeared in National Geographic and the New York Times Magazine, among other publications. She lives in Oakland, California.

Roach exhibits both a keen sense of humor and a sincere respect for the dearly departed.
— American Scientist

Roach saw some macabre things, but she describes them with respect and irresistible humor.
— Austin American-Statesman

Bring[s] alive a subject that has the potential to be deadly dull.
— Steve Fiffer - Chicago Tribune

Her morbid subject—perverse, unsettling and voyeuristic—makes her book hard to put down.
— Dean Narcisco - Columbus Dispatch

This bizarre tome will shock, disgust, intrigue and entertain you all at the same time.
— Mary Morrison - Coral Gables Gazette

Though the cover...will draw many readers to this book, its deft prose will keep them returning.
— Fred Bortz - Dallas Morning News

A fascinating survey of the data yielded by corpses both medieval and modern.
— Discover Magazine

An informative, gently funny but never irreverent look at the various uses society makes of the dead.
— Tom Pantera - Forum

Fascinating, unexpectedly fresh and funny look at the multiplicity of ways in which cadavers benefit the living.... entertaining, absolutely.
— Kirkus Reviews starred review

Despite the irreverent, macabre title, this is a respectful and serious examination of what happens to cadavers, past and present.
— Michael D Cramer - Library Journal

As weird as the book gets, Roach manages to convey a sense of respect and appreciation for her subjects.
— Los Angeles Times

It's a rare talent that can make people want to throw up and laugh at the same time.
— Roy Rivenberg - Los Angeles Times Book Review

A funny but never disrespectful look at the curious world of cadaver research.
— Netsurfer.com

[A] mordantly witty history of the scientific contributions made by the no-longer-living.
— Outside

Roach traces the use of the cadaver...and describes odd, behind-the-scenes moments perfect to halt all discussion at dinner.
— T.D. Mobley-Martinez - Philadelphia News

Genuinely funny and destined to be a classic read.
— Donald A Collins - Pittsburgh Tribune-Review

What saves the subject matter from intolerable gruesomeness is Roach. Her interest is genuine, despite her droll tone.
— B.T. Shaw - Portland Oregonian

As informative and respectful as it is irreverent and witty....Impossible to put down.
— Publishers Weekly starred review

Expect the insightful with the hilarious.
— Bridget Kinsella - PW Daily

[Roach's] firsthand accounts of places and people make this a captivating look at life after death.
— Science News

A laugh-out-loud funny book....one of those wonderful books that offers enlightenment in the guise of entertainment.
— Washington City Paper

Roach...goes into gruesome detail, but she also succeeds in not making the subject at hand too morbid.
— Kim Colton - Willamette Week

A fascinating book and, once you pick it up, you won't likely put it down.
— William R Wineke - Wisconsin State Journal

As fascinating as it is funny.... The research is admirable, the anecdotes carefully chosen, and the prose lively; and they combine to produce a book that everyone in the health care field should have to read, and everyone else will want to.

— Caleb Carr, author of The Alienist