For Love of Evil: Book Six of Incarnations of Immortality (Mass Market) 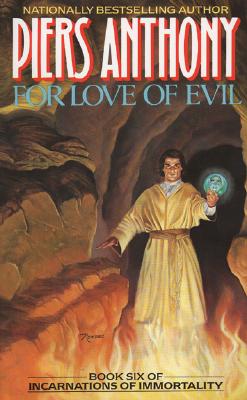 This is book number 6 in the Incarnations of Immortality series.

The Man Who Would Be Satan

Parry was a gifted musician and an apprentice in the arts of White Magic. But his life of sweet promise went disastrously awry following the sudden, violent death of his beloved Jolie.

Led down the twisted path of wickedness and depravity by Lilah the harlot demoness, Parry thrived -- first as a sorceror, then as a monk, and finally as a feared inquisitor.

But it wasn't until his mortal flame was extinguished that Parry found his true calling -- as the Incarnation of Evil. And, at the gates of Hell, he prepared to wage war on the master himself -- Lucifer, the dark lord -- with dominion over the infernal realms the ultimate prize!

New York Times-bestselling author Piers Anthony has written over one hundred books. His first fantasy, A Spell for Chameleon, won the August Derleth Fantasy Award for best novel in 1977, and commenced his acclaimed Xanth series.