The History of Living Forever: A Novel (Hardcover) 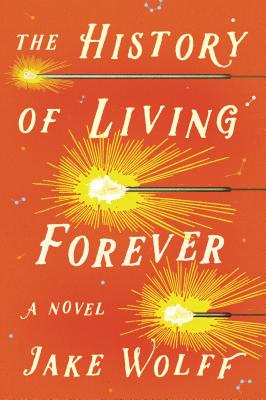 By Jake Wolff
$27.00
Have a question? Please let us know and we will reply as soon as we can. Thanks!

The morning after the death of his first love, Conrad Aybinder receives a bequest. Sammy Tampari was Conrad’s lover. He was his teacher. And, it turns out, he was not just a chemist, but an alchemist, searching for a mythic elixir of life. Sammy’s death was sudden, yet he somehow managed to leave twenty years’ worth of his notebooks and a storage locker full of expensive, sometimes baffling equipment in the hands of his star student. The notebooks contain cryptic “recipes,” but no instructions; they tell his life story, but only hint at what might have caused his death. And Sammy’s research is littered with his favorite teaching question: What’s missing?

As Conrad pieces together the solution, he finds he is not the only one to suspect that Sammy succeeded in his quest. And if he wants to save his father from a mysterious illness, Conrad will have to make some very difficult choices.

A globe-trotting, century-spanning adventure story, Jake Wolff’s The History of Living Forever takes us from Maine to Romania to Easter Island and introduces a cast of unforgettable characters—drug kingpins, Big Pharma flunkies, centenarians, boy geniuses, and even a group of immortalists masquerading as coin collectors. It takes us deep into the mysteries of life—from first love to first heartbreak, from the long pall of grief to the irreconcilable loneliness of depression to the possibility of medical miracles, from coming of age to coming out. Hilarious, haunting, heart-busting, life-affirming, it asks each of us one of life’s essential questions: How far would you go for someone you love?

Jake Wolff was born and raised in Maine. He received an MFA in fiction from the University of Wisconsin–Madison and a Ph.D. in creative writing from Florida State University. His stories and essays have appeared in journals such as Tin House, One Story, and American Short Fiction. He lives in Orlando, Florida, where he is an assistant professor of English at the University of Central Florida. The History of Living Forever is his first novel.

"[In The History of Living Forever,] the mystical and the romantic combine for a love story that also confronts the meaning of life."
—Seija Rankin, Entertainment Weekly

"Exuberant . . . [Jake] Wolff is clearly having fun as he shuffles his narrative deck . . . [Wolff is] an author with a refreshing restlessness, who will try anything to entertain his readers."
—Michael LaPointe, The New York Times

"One of my favorite books of the month if not the entire summer. The History of Living Forever follows a high school kid named Conrad whose teacher/boyfriend dies mysteriously—leaving him the recipe for the Elixir of Life. Conrad is tasked with completing the recipe, which naturally sends him on a wild adventure uncovering life's—and his teacher's—biggest secrets."
—Mehera Bonner, Cosmopolitan

"Jake Wolff's debut is ambitious and bountiful, centered on the universal human yearning for eternal life . . . Fittingly, the story is larger than life, and Wolff connects Conrad's journey with historical asides about others' attempts at solving the problem of death. He weaves in the past through Sammy's journal entries, and projects into Conrad's future, all the while exploring the often desperate emotions underlying our search for everlasting life — hope, love, and grief."
—Arianna Rebolini, Buzzfeed

"The History of Living Forever is an ambitious and emotionally raw thing, starting and ending with grief, with a twisting alchemical plot tying these human moments together . . . Queerness is central to The History of Living Forever . . . [The] framing of the elixir as a quest not only for immortality, but for normalcy and belonging, is unique amongst the host of alchemy-based SFF I’ve read and seen . . . A page-turner in all its mysteries, both scientific and psychological. It’s the kind of book you think of long after you’ve finished it."
—Em Nordling, Tor.com

"A science fiction story, a gay romance, and a Hardy Boys mystery all rolled into one . . . At its core, Wolff’s book does what all good novels do: It makes an unfamiliar world feel familiar. It moves us with beautifully limned characters. It takes us on a wild ride of twists and turns that place us in the past, present and the future."
—Ken Harvey, Lambda Literary

"One of those big, ambitious first novels . . . A celebration of the possibility of love, of the gift of loving . . . At times, the novel reminds one of the work of Thomas Pynchon in its paranoid sense of a dark, secret world underneath what we think of as normal reality, but Wolff has his own, unique vision and a gripping poetic style. His characterizations sometimes call to mind Michael Chabon’s best work . . . There’s a great deal of poetry in Wolff’s writing, and his style both carries the reader along and makes her stop and enjoy particularly lovely bits of verbal scenery."
—John M. Clum, New York Journal of Books

"A quest that threads through the past, present and future and sweeps into its maelstrom two people whose all too brief connection would have widely rippling impacts on their lives and the lives of those around them . . . Carving the narrative into a sort of past/present/future triptych is an inspired idea, one that helps accentuate the relentless flow of time even as our heroes try desperately to divert or otherwise delay it . . . Sammy’s globe-trotting journeys and tumultuous relationships juxtapose nicely with the frantic nervousness and familial angst of Conrad in the present . . . ."
—Allen Adams, The Maine Edge

"With uncommon perceptiveness and a vivid imagination, Wolff has crafted a story that is both highly unusual and, in its way, universal. The History of Living Forever is not only another entry on the long list of stories about the quest for eternal life, but part of another grand storytelling tradition: the coming-of-age tale."
—Hannah Calkins, Shelf Awareness

"Most stories about searching for the elusive elixir of life star either villains or vampires (or both). But this tale focuses on a gay man, and he's not trying to keep his dashing good looks— he's trying to prevent more people he loves from dying."
—Lauren Basalmo and Molly Stout, Cosmopolitan

"More than just a briskly plotted thriller, the book is a meditation on love and loss. The characters' obsession with the elixir brings home the parallels between eternal life and death: Both are a kind of certainty. The best part is the author's figurative descriptions, which teeter between quips and revelations . . . This beautifully written, carefully plotted, intelligent debut is a melancholy pleasure."
—Kirkus, starred review

"The search for an eternal life potion weaves through raw emotion, scientific curiosity, and heartbreak in [Jake] Wolff’s intoxicating debut . . . The epic sweep and sly humor in the midst of enormous anguish will remind readers of Michael Chabon’s work as they relish this heady exploration of grief, alchemy, and love."
—Publishers Weekly, starred review

"[Jake] Wolff riffs on immortality in a fresh, engrossing tale with a zany cast of characters . . . Wolff's wild, hilarious, and moving adventure is rooted in reason and the tough truths of life: how easy it is to hurt the ones we love; that forgetting is easier than forgiving; and that life (with an elixir or not) is never long enough."
—Katharine Uhrich, Booklist, starred review

"Who doesn’t crave a book about first love, alchemy and eternal life potions? Jake Wolff’s novel is about those things and much more. Narrated by a man looking death in the eyes, it’s a globe-spanning mystery as well as a thoughtful meditation on mental illness and mortality . . . Epic in its scope, Wolff’s novel blends history and myth to paint a compelling portrait of eternal love and the timeless quest for eternal life. "
—Books are Magic on Medium

"[The History of Living Forever is] about growing, developing relationships, and learning to live. A noteworthy first novel."
—Michael Russo, Library Journal

“Full of compassion and creativity, humor and suspense, The History of Living Forever follows a vivid cast of characters as they search for the elixir of life—and the secrets they’ve hidden from one another. Jake Wolff’s voice rings with authenticity and wisdom as he reveals that the mystery of human being has as much to do with relationships as it does with mortality. As the novel careens across countries and through centuries, building toward a climax that Wolff pulls off with astonishing panache, The History of Living Forever asks how far we’ll go for the ones we love.”
—Chloe Benjamin, author of The Immortalists

“The History of Living Forever is a mystery wrapped in a love story wrapped in a thrilling scientific adventure. Two star-crossed heroes travel the globe and dive into history, seeking the elixir of life. While they gather ingredients they also collect pieces of a larger puzzle, uncovering secrets and betrayals that lead to a deeper understanding of family, connection, and the inner spirit that fuels us all. Jake Wolff is an extraordinary alchemist, and his story’s formula will linger with readers long after they turn the final page.”
—Hannah Tinti, author of The Good Thief and The Twelve Lives of Samuel Hawley

“Jake Wolff has gifted us a deep, daring, adventurous, and highly entertaining debut. At turns funny, painful, philosophical, and always surprising, The History of Living Forever manages to tackle some of the big questions about being human, and still somehow remains light on its feet—not an easy task, to be sure. This book is a delight.”
—Jonathan Evison, author of West of Here and The Revised Fundamentals of Caregiving

“Like shock therapy, like either the origin or demise of a living thing, love (both romantic and familial) can be explained (to an inadequate and woefully disappointing degree) by chemistry. But how we become, say, a couple, a family, or ourselves? Nobody really knows—but this novel slyly demonstrates its alchemy. We see both the actual history of crackpot genius chemists and their pursuit of immortality from 219 B.C. to the present as well as the unforgettable tale of Conrad Aybinder’s attempt to understand the men he loves: his long-dead high school chemistry teacher; his perpetually dying father; and his beloved, suddenly mortal husband. Whip-smart, heartbreaking, engrossing, often funny, and truly original, Jake Wolff’s The History of Living Forever is one of the finest debut novels I’ve ever read.”
—Mark Winegardner, author of Crooked River Burning and The Godfather Returns

“The History of Living Forever, Jake Wolff’s dazzling debut novel about a young man’s quest to discover a life-extending elixir, is a coming-of-age story but also an edge-of-your-seat thriller; a tender love story but also a rollicking buddy adventure; a celebration of the intellect but also a tribute to the human heart. An inventive work of the imagination that spans generations and continents, and is enhanced by its Anthony Doerr–like reverence for science and history, The History of Living Forever seamlessly weaves together complex plots, historical interludes, compelling characters, delicious digressions, facts and fictions, and time itself.”
—Judith Claire Mitchell, author of A Reunion of Ghosts