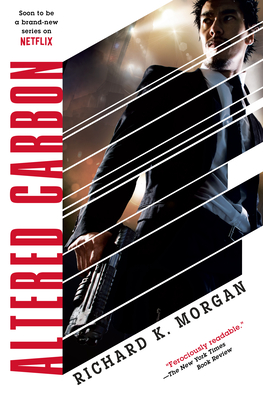 By Richard K. Morgan
$17.00
Have a question? Please let us know and we will reply as soon as we can. Thanks!

This is book number 1 in the Takeshi Kovacs series.

NEW YORK TIMES BESTSELLER • NOW AN EXCITING SERIES FROM NETFLIX • The shell that blew a hole in his chest was only the beginning in this “tour de force of genre-bending, a brilliantly realized exercise in science fiction.”—The New York Times Book Review

In the twenty-fifth century, humankind has spread throughout the galaxy, monitored by the watchful eye of the U.N. While divisions in race, religion, and class still exist, advances in technology have redefined life itself. Now, assuming one can afford the expensive procedure, a person’s consciousness can be stored in a cortical stack at the base of the brain and easily downloaded into a new body (or “sleeve”) making death nothing more than a minor blip on a screen.

Ex-U.N. envoy Takeshi Kovacs has been killed before, but his last death was particularly painful. Dispatched one hundred eighty light-years from home, re-sleeved into a body in Bay City (formerly San Francisco, now with a rusted, dilapidated Golden Gate Bridge), Kovacs is thrown into the dark heart of a shady, far-reaching conspiracy that is vicious even by the standards of a society that treats “existence” as something that can be bought and sold.

Richard K. Morgan is the acclaimed author of The Cold Commands, The Steel Remains, Thirteen, Woken Furies, Market Forces, Broken Angels, and Altered Carbon, a New York Times Notable Book that also won the Philip K. Dick Award in 2003. The movie rights to Altered Carbon were optioned by Joel Silver and Warner Bros on publication, and a film version is currently in development with Mythology Entertainment. Market Forces was also optioned to Warner Bros, before it was even published, and it won the John W. Campbell Award in 2005. Thirteen won the Arthur C. Clarke Award in 2007 and is currently under movie option to Straight Up films. The Steel Remains won the Gaylactic Spectrum Award in 2010, and its sequel, The Cold Commands, appeared in both Kirkus Reviews’ and NPR’s Best Science Fiction/Fantasy Books of the Year lists. Morgan is a fluent Spanish speaker and has lived and worked in Madrid, Istanbul, Ankara, and London, as well as having traveled extensively in the Americas, Africa, and Australia. He now lives in Scotland with his wife, Virginia, and son, Daniel.

“Gritty and vivid . . . looks as if we have another interstellar hero on our hands.”—USA Today

“This seamless marriage of hardcore cyberpunk and hard-boiled detective tale is an astonishing first novel.”—London Times

“An astonishing piece of work . . . A wonderful SF idea . . . Altered Carbon hits the floor running and then starts to accelerate. Intriguing and inventive in equal proportions and refuses to let go until the last page.”—Peter Hamilton

“An exciting sf/crime hybrid, with an intricate (but always plausible) plot, a powerful noir atmosphere, and enough explosive action to satisfy the most die-hard thriller fan.”—SF Site

“An exhilarating and glossy adventure . . . What makes Altered Carbon a winner is the quality of Morgan’s prose. For every piece of John Woo action there is a stunning piece of reflective description, a compelling sense of place, and abundant 24-karat witticisms.”—SFX Magazine