With a Tangled Skein (Incarnations of Immortality #3) (Mass Market) 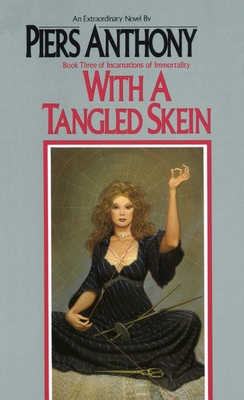 This is book number 3 in the Incarnations of Immortality series.

Here in this third complete-in-itself novel of the Incarnations of Immortality, Piers Anthony weaves a fascinating plot as tangled as any skein of fate. This is Anthony at his most ingenious, with another gripping fantasy of the struggle of the incarnations against the machinations of Satan.

When the man Niobe loved was shot, she learned that she had been the target, in a devious plot of the Devil's.

Hoping for revenge. Niobe accepted a position as one of the three Aspects of Fate, only to find that Satan's plots were tangled into the very Tapestry of Fate. Now the Evil One was laying a trap to ruin Niobe's granddaughter Luna, who threatened his plans—and he had tricked her son into Hell.

Niobe's only chance to save her son and Luna was to accept a challenge by the Prince of Deceit—a challenge to be decided in Hell and in a maze of Satan's devising!