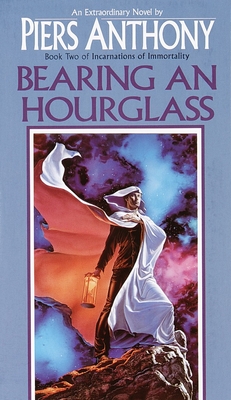 This is book number 2 in the Incarnations of Immortality series.

Like On a Pale Horse, this second, complete-in-itself novel of the Incarnations of Immortality is a richly imagined and always fascinating story. And again, Piers Anthony adds to his gripping plot a serious, though-provoking study of good and evil.

When life seemed pointless to Norton, he accepted the position as the Incarnation of Time, even though it meant living backward from present to past.

The other seemily all-powerful Incarnates of Immortality—Death, Fate, War, and Nature—made him welcome. Even Satan greeted him with gifts. But he soon discovered that the gifts were cunning traps. While he had been distracted, he had become enmeshed in a complex scheme of the Evil One to destroy all that was good.

In the end, armed with only the Hourglass, Norton was forced to confront the immense power of Satan directly. And though Satan banished him to Hell, he was resolved to fight on.