Soon: An Overdue History of Procrastination, from Leonardo and Darwin to You and Me (Paperback) 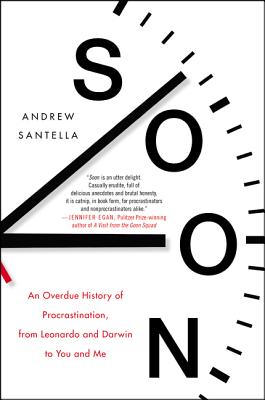 On Our Shelves Now (Please contact store to confirm availability)

“Well-researched…[Soon] argues that in many cases eminent figures have done great work while putting off work they were supposed to be doing. Procrastination might, for some people, be part of innovation and the creative process.” — Wall Street Journal

A fun and erudite celebration of procrastination

An entertaining, fact-filled defense of the nearly universal tendency to procrastinate, drawing on the stories of history’s greatest delayers, and on the work of psychologists, philosophers, and behavioral economists to explain why we put off what we’re supposed to be doing and why we shouldn’t feel so bad about it.

Like so many of us, including most of America’s workforce, and nearly two-thirds of all university students, Andrew Santella procrastinates. Concerned about his habit, but not quite ready to give it up, he set out to learn all he could about the human tendency to delay. He studied history’s greatest procrastinators to gain insights into human behavior, and also, he writes, to kill time, “research being the best way to avoid real work.”

He talked with psychologists, philosophers, and priests. He visited New Orleans’ French Quarter, home to a shrine to the patron saint of procrastinators.  And at the home of Charles Darwin outside London, he learned why the great naturalist delayed writing his masterwork for more than two decades.

Drawing on an eclectic mix of historical case studies in procrastination—from Leonardo da Vinci to Frank Lloyd Wright, and from Old Testament prophets to Civil War generals—Santella offers a sympathetic take on habitual postponement. He questions our devotion to “the cult of efficiency” and suggests that delay and deferral can help us understand what truly matters to us. Being attentive to our procrastination, Santella writes, means asking, “whether the things the world wants us to do are really worth doing.”

Andrew Santella has written for such publications as GQ, the New York Times Book Review, Slate, and the Atlantic.com. He lives in Brooklyn, New York, where he is likely at this very moment putting off doing something important.

“Well-researched…[Soon] argues that in many cases eminent figures have done great work while putting off work they were supposed to be doing. Procrastination might, for some people, be part of innovation and the creative process.” — Wall Street Journal

“Soon is an utter delight. Casually erudite, full of delicious anecdotes and brutal honesty, it is catnip, in book form, for procrastinators and non-procrastinators alike.” — Jennifer Egan, author of Manhattan Beach

“A witty, smart and, yes, motivating exploration into that quality that unites all of us: a knack for putting things off ‘til tomorrow. Soon is a lively reminder that while necessity might be the mother of invention, delay can be the source of creative achievement.” — Michael Hainey, author of After Visiting Friends

“Brief and poignant...Engaging, accessible, and frequently humorous...Fans of unusual historical facts and those who Try will find plenty of value in this self-help, psychological study.” — Library Journal

“Soon is funny and smart, but also—and I mean this as praise—a little insane…Despite its subtitle, Soon is not merely a “history”; it is a stylized re-creation of what happens when a procrastinator tires to write this history.” — BookForum